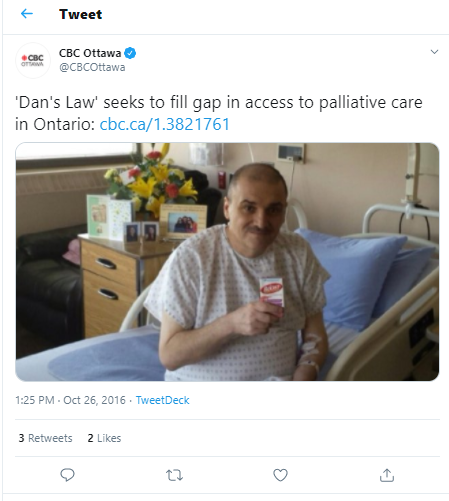 In the middle of August, I got an email from a colleague asking about Dan’s Law.  She knew a patient who was looking to return to Ontario who had a life-limiting prognosis and wanted to spend her final months with her family receiving palliative care in Ontario.

As recently as last year, a patient coming to Ontario from another province would have been subjected to a three-month wait for OHIP services.

In March, the Ontario government waived the three-month OHIP wait for Canadians returning to Ontario in response to the COVID-19 global pandemic. With Bill 175’s implementation, patients who can’t wait for palliative and end-of-life care will be able to qualify for OHIP, like Dan Duma, for whom the original private member’s bill was named.

Dan Duma and his wife, Ana, moved to Alberta to find work after General Motors’ Windsor transmission plant closed. There, Dan was diagnosed with liver cancer and was told he had only a short time to live. Duma and his wife decided to return to Windsor, where their two daughters live, for palliative care.  Unfortunately, due to a loophole in OHIP, Dan was not able to receive the care he needed because of the three-month waiting period for patients moving between provinces.

The coming changes to be made in Bill 175 will ensure that no further patients will suffer as Dan did – without the medically necessary care he deserved during his final weeks of life to be with his family, knowing his time was coming to an end.

There are many people who made this possible.

It begins with Laura and Ana Duma.  They allowed me to bring Dan’s story forward.  This simply does not happen without them.

It was MPP Lisa Gretzky’s private member’s bill in 2016 that brought Dan’s story to light.  It was her tenacity that would not let it die (which it did twice under the previous government).

I want to thank the Windsor Star, my local paper, who first wrote about Dan’s story, and the CBC for covering Dan’s Law throughout its tortuous journey.  I want to thank Andre Picard and the Globe and Mail for saying what we were all thinking.  We are all better and smarter for reading Andre’s columns.

I want to thank the Ontario Medical Association (OMA), particularly Angela Jonsson and the Health Care Advocacy group, for its help and support.  Angela did many, many things for Dan’s Law but it is illustrative of her dedication that she compiled the support of several medical and labour institutions and organizations for Dan’s Law during March break 2018.

I want to thank former OMA and Canadian Medical Association president Dr. Albert Schumacher for teaching me how to advocate (and how to maximize the collection of travel reward points).

I want to thank Ottawa MPP John Fraser, who was the interim leader of the Ontario Liberal Party but in his former role as Parliamentary Assistant to the Health Minister worked tirelessly to help advocate for a regulation change that was the spirit of Dan’s Law.  John is a hospice volunteer.  There is special place in heaven for these kinds of people.

Perhaps most of all, I would like to thank the Honourable Minister Christine Elliott for making Dan’s Law, in #OntarioSpirit, a reality.  Too often, good ideas get lost in the vastness of everyday life and the complexities of government.  Thank you for making sure this idea did not get lost.

A lot has been said in recent months about how easy it is to score on empty nets.  This was never a sure thing. Many barriers can and did arise. It takes a goalscorer’s touch to put the biscuit in the basket.  If this job was easy, anyone could do it.  With the COVID pandemic, it would have been easy for something like this to get lost in a sea of fear and uncertainty.

And finally, this is not only a good thing for patients, it is also a good thing for government in Ontario.  Lisa Gretzky is a member of the Official Opposition but that did not stop her from bringing this issue forward.  It also did not stop our health minister from supporting and nurturing this idea, taking it further than we dreamed possible.

It takes integrity to look across the floor, see a good idea and bring that idea to the light. I hope that current and future governments in Ontario will look at this as an example of what a good government looks and behaves like. It is amazing what we can accomplish when we care not who takes the credit.

This is how good government works.