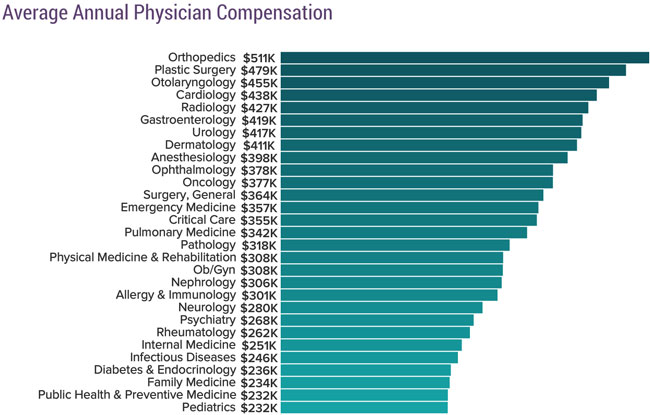 It’s important to note that the survey this report is based on was completed prior to the outbreak of COVID-19, so the virus’ impact on emergency medicine salaries in 2020 is still unclear. However, compared to the prior year’s report, the average annual salary for an emergency medicine physician increased slightly from $353K in 2019’s report to $357K in 2020. Emergency medicine remained in 13th place among all 29 reporting specialties, the same ranking it held in 2019.

Emergency medicine physicians are one of the top three specialties in terms of compensation satisfaction. Sixty-seven percent said they felt fairly compensated, tied with oncologists and radiologists. This dropped only slightly from the prior year, when 68% reported being satisfied with their compensation.

Self-employed physicians — a group which includes locum tenens doctors — reported a 20% higher annual salary than compared to employed physicians ($357K vs $297K). This is slightly higher than last year, which showed a nearly 18% difference in salary ($390K vs $331K). These numbers show the potential for locum tenens emergency medicine physicians to earn more money than their employed counterparts.

COVID-19’s effect on these statistics

This survey was conducted prior to COVID-19, and the pandemic has dramatically affected physicians’ earnings, whether it is a result of layoffs, furloughs, pay cuts, or a change in the structure of incentive bonuses. As a result of the pandemic, practices reported a 55% decrease in revenue and a 60% decrease in patient volume on average, resulting in hospitals and physician groups nationwide having to layoff, furlough, and cut the pay of their physicians. Significantly, 43,000 of healthcare workers were laid off in March 2020.